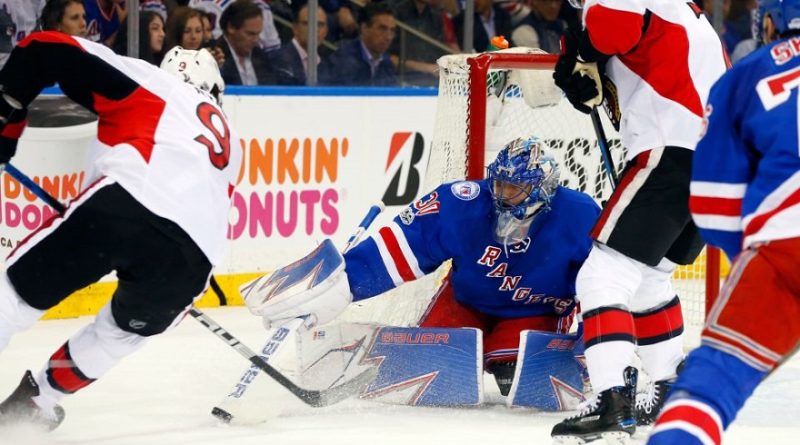 Through the spray of ice during the Rangers and Senators NHL playoff game, Dunkin’ Donuts melts the heart of a 5-year-old hockey fan with its rink board logo at Madison Square Garden.

Shortly after the Rangers scored in the first period, my son shouted “Daddy, I see Dunkin’ Donuts!” Moments later, I saw it, too. I was surprised that Dunkin’ Donuts had already resonated with a fan who is in preschool.

Rink board ads were adopted by NHL franchises in 1980 and have become part of larger sponsorship packages. According to emerging-advertising-media, these placements cost more than $300,000 per year depending on the venue. The New York Rangers at Madison Square Garden likely command double that rate. While most rink boards today have static ads that are seen throughout the game, the NHL began experimenting with virtual advertisements during the World Cup of Hockey in 2016 to further monetize each event, but according to The Globe and Mail, the technology is too cumbersome for it to become widely adopted right now.

Let’s face it, impressions are undervalued. Dunkin’ Donuts logo triggered a sense of delight in my 5-year-old because of the branding behind it. In his world, Munchkins are tied to social events such as play dates, birthday parties and holidays. On each occasion, kids gather around and select from the assortment of plain, powered and chocolate confections to fuel their activity. The association is positive right from the start and it’s lasting. As an adult, I felt that glee when I found a Dunkin’ Donuts while in Madrid suffering from jet lag. While the NHL rightly captures the 24 – 44 demographic, an enduring brand has established its roots in that audience long before.

My son did not stay up to watch the rest of the Rangers game as it went on well past his bedtime. At breakfast the next morning, I told him the Rangers won. He nodded his head in approval and fixed his gaze on me. “Daddy, when can we go back to Dunkin’ Donuts?”

December 2, 2022 David Dowling Comments Off on Imint and Superhexa Team up on Next Gen AR Glasses
Crypto Web3

December 17, 2022 Jon Jaehnig Comments Off on FTX Founder Sam Bankman-Fried Arrested on Fraud Charges
Share this ArticleLike this article? Email it to a friend!
Email sent!