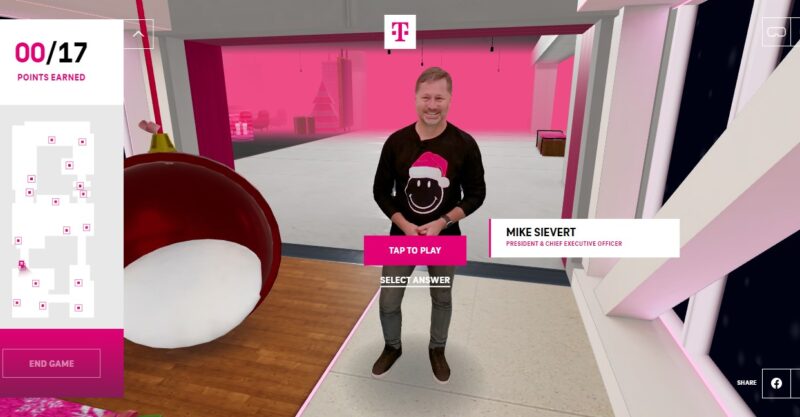 Our eye on the crypto charts, keeping up with FTX, Visa’s play in crypto, Meta’s projected revenue spend on XR, T-Mobile Releases “Game of Phones” plus a slew of other news including a special holiday roundup from 8th Wall.

An eye on the Charts

Charts saw a steep decline in the beginning of the week followed by another plateau. Prices dipped again, recovered from the week’s lowest trough, and have since stabilized somewhat — though still below late last week. For all of that, Bitcoin and Ethereum are both down around 5%, with Bitcoin above $15k and ETH around $1.2k.

While one altcoin or another usually provides a rosier outlook, other products are on steeper and more consistent downward trends, with XRP, Polygon, Solana, and Uniswap down over 10% from last week.

Former FTX head Sam Bankman-Fried is reportedly being extradited to the United States. Meanwhile, the United States has also levied charges against Alameda, a sort of partner company that essentially laundered money with FTX. Two of the founders and executives of that company have already pleaded guilty to charges. Amid the chaos, the Senate Banking Chairman has called for an outright crypto ban.

Meanwhile, FTX awkwardly continues to exist seemingly with the sole objective of cleaning up the offices however they can. The company’s new executives have reportedly “identified” some billion dollars worth of assets — potentially the funds that SBF had previously said could be redistributed to defrauded clients. The company is also trying to recoup funds fraudulently donated to politicians.

After all, as any hodler will tell you, cryptocurrency didn’t do anything wrong in the FTX debacle — FTX did something wrong with cryptocurrency. While calls to ban crypto as a result are arguably understandable, what FTX did was nothing that hasn’t been done with stocks, fiat, insert favorite asset here.

Meta is set to put 20% of its revenue into its XR ventures next year. That’s still a chunk of change, but down from this year. While Meta’s VR hardware continues to grow, a lot of that money is going into AR research on projects that are likely years out. As a result, shareholders have been uneasy about the company’s big R&D budget in the past.

What’s more than that, the company’s revenue engine is turning a little more slowly lately as external policies have impacted its ability to make money from ads on its social media platforms, which many expect are subsidizing its XR budget.

October 10, 2022 Jon Jaehnig Comments Off on Meta Explores Cross-Platform Avatars and New Brands in Emerging Tech
Share this ArticleLike this article? Email it to a friend!
Email sent!