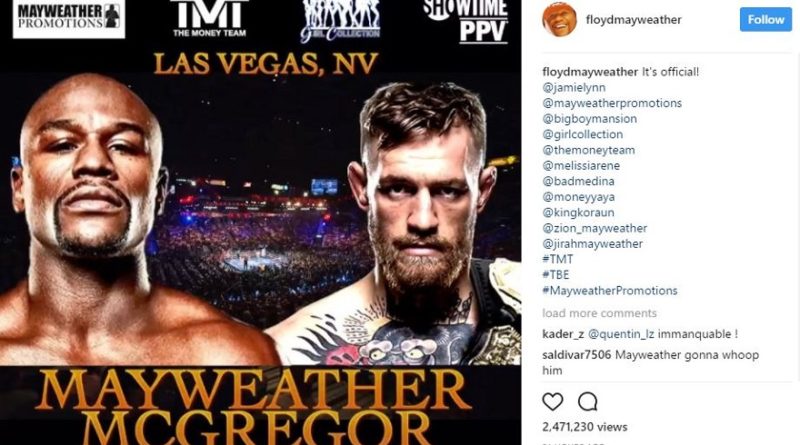 Conor McGregor and Floyd Mayweather have turned the hype around their superfight into reality. The two sides reached an agreement yesterday to fight in Las Vegas on August 26, 2017. The superfight will be the most lucrative purse in history. The undefeated boxing champion Mayweather will come out of retirement to fight the reigning UFC champion McGregor. Considering the personalities of these two champs, the fight could reach a billion dollars through total gate event and Pay-Per-View.

As we reported in March, Mayweather and McGregor are not only great fighters, they are tremendous promotional machines similar to the great Muhammad Ali. The cross-over between UFC and Boxing will draw more fans to each base and create opportunities for future clashes between these titans.

Mayweather will be a prohibitive favorite in this fight leaving McGregor to relish the role of underdog. The verbal sparring between the two champions promises to be as much of a battle as what occurs in the ring. McGregor wasted no time by publishing a picture of Mayweather’s father against his own on Twitter to poke fun at Mayweather’s age.

Who will win, Mayweather or McGregor?

The outcome of the fight will have historic implications for fight fans for years to come. Regardless of the outcome, Mayweather and McGregor have already won. Should the match live up to its hype, fans will be salivating for more. A rematch could drive the enormous purse even higher for Superfight II which would be hard to resist. However, if Mayweather dispatches McGregor quickly the hype will be let out like air from a balloon. Fans who attend can chase the fleeting excitement at the gambling tables leaving Las Vegas casinos the big winners.

For marketers, the relentless hype from McGregor and Mayweather is a worthwhile case study. As UFC President Dana White said, “This is a very, very hot fight and this is a fight that the fans want. It’s going to be a tremendous event. The fans wanted this fight.”

March 2, 2017 David Dowling Comments Off on Snap Inc. Will Force Advertisers to Be Creative
Marketing

March 7, 2017 David Dowling Comments Off on Surfs up for lululemon athletica Swimwear
Marketing

March 1, 2017 David Dowling Comments Off on The Force Awakens Marketers’ Nostalgia
Share this ArticleLike this article? Email it to a friend!
Email sent!