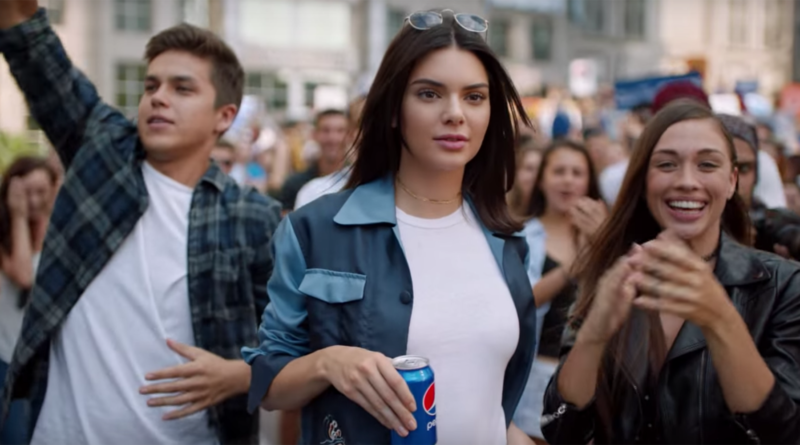 The biggest advertising story this week is the epic failure of the Pepsi Kendall Jenner ad, “Jump In.” If you missed the controversy, here it is in a nutshell: Pepsi, as part of its “Moments” campaign, released a new ad on Tuesday, April 4, featuring reality TV star Kendall Jenner. The ad shows a slew of attractive hipsters of different ethnic backgrounds protesting something ambiguous, holding generic signs that read “peace” and “join the conversation.” Moved to get involved, Jenner walks off her modeling set, rips off her wig, grabs a can of Pepsi and joins the crowd. The ad culminates with Jenner handing a police officer the can of soda. He opens it, takes a sip and the crowd erupts in cheers.

The ad was pulled the next day after tremendous backlash. Pepsi released a statement saying, “Pepsi was trying to project a global message of unity, peace and understanding. Clearly we missed the mark, and we apologize.”

In its effort to convey a global message of peace (and appeal to millennials), the Pepsi Kendall Jenner ad seemed to reduce recent political protests into caricatures and excuses to party. In 1971, its competitor, Coca-Cola, also released an ad aiming to convey a global message of peace. The “Hilltop” ad, known for its jingle “I’d Like to Buy the World a Coke,” was created by Bill Backer of McCann-Erickson. Though it wasn’t as dramatic as Don Draper’s epiphany in the final scene of Mad Men, the story of its inspiration is pretty cool. Backer and his fellow travelers were stranded at Shannon Airport in Ireland for the night due to fog. He was struck by their camaraderie as they waited to board their flight the next day, chatting and laughing and drinking bottles of Coke. The idea was born.

Backer and his team originally created the jingle for radio and the song was such a hit that stations across the country received requests for it to be played again. The television spot was created months later on a mountain in Italy and is widely considered one of the most popular television ads of all time.

These Coca-Cola and Pepsi ads were created 46 years apart, but they were trying to convey the same message of unity.

Why did the Pepsi Kendall Jenner ad fail and the Coca-Cola ‘Hilltop’ ad succeed?

In the end, the Pepsi ad did unite people, just not in the way the brand intended.

Walmart Enters the Metaverse and NVIDIA Seeks to Populate It

October 2, 2022 Jon Jaehnig Comments Off on Walmart Enters the Metaverse and NVIDIA Seeks to Populate It
NFT Web3

December 16, 2017 David Dowling Comments Off on Five Stories Told Through Data Visualization
Share this ArticleLike this article? Email it to a friend!
Email sent!